The Land Reform (Scotland) Act 2016, placed a duty on Scottish Ministers to produce a statement of land rights and responsibilities, set up the Scottish Land Commission and made provision for various changes to land ownership and management. 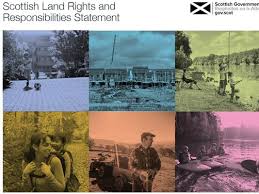 The Scottish Land Rights and Responsibilities Statement (LRRS) (September 2017.) This first statement sets out six key principles and expectations for the future relationship between people and land to achieve:

A Scotland with a strong and dynamic relationship between its land and people, where all land contributes to a modern and successful country, and where rights and responsibilities in relation to land are fully recognised and fulfilled.

The LRRS reflects changing expectations for the ways in which decisions about land are made. Together with the Scottish Government’s Guidance on Engaging Communities in Decisions about Land, it makes it clear that a wider range of voices should be able to influence and benefit from land use decisions.

You can read the full statement here: Scottish Land Rights and Responsibilities Statement

The Scottish Land Commission was established on 1st April 2017. Its stated aim is to drive:

a programme of land reform spanning both urban and rural land, to improve the productivity, diversity and accountability of the way Scotland’s land is owned and used.

Key elements of its work include:

The Scottish Land Commission is currently advising Scottish Ministers on the development of Regional Land Use Partnerships. The interim report (published July 2020) proposes that community membership will be a key element of the tripartite governance arrangement and that ‘substantial elements of funding for climate, natural capital and rural development should be delivered and targeted through Regional Land Use Partnerships’.

It also highlights that they should be ‘exemplars for those who make decisions about land, meeting the expectations of Scottish Land Rights and Responsibilities Statement (LRRS), the Scottish Government Guidance on Engaging Communities in Decisions Relating to Land, and the National Standards for Community Engagement’.

You can read the full report here: https://landcommission.gov.scot/downloads/5f1029bf396f9_Scottish%20Land%20Commission%20RLUP%20Interim%20Report.pdf

The Scottish Land Fund supports community ownership of land and assets. It is funded by the Scottish Government and delivered in partnership with the National Lottery Community Fund and Highlands and Islands Enterprise.

It offers grants of up to £1 million to communities to take ownership of buildings and land that matter to them, as well as, support to develop ideas into practical projects.