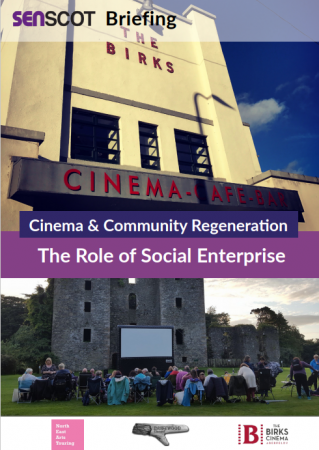 complex social issues across Scotland. This Briefing highlights the regenerative effects that local cinema can have on communities, bringing about positive social change through a range of activities.

Published in 2016, Creative Scotland’s Mapping Film Exhibition in Scotland provided a comprehensive overview of film exhibitors across the country, identifying 324 exhibitor locations from mobile community cinemas operating in village and town halls all the way through to large multiplexes. In the same year, a joint report, Your Cinema, Your Community, from Regional Screen Scotland and Social Value Lab offered
a statistical analysis of the impact of local cinema in Scotland.

By researching the broad spectrum of cinema exhibition, these reports highlighted gaps in provision, issues with accessibility, a lack of programming diversity and pressures on sustainability. They also demonstrated the importance of local cinema to communities, particularly  in terms of removing barriers around geographical access and affordability.

The Scottish Government has stated its commitment to “supporting, developing and advocating Scotland’s culture, heritage and creativity, and ensuring that culture reaches a wide audience at home and abroad.” In September 2017, the Scottish Government pledged an extra £10million investment into the film and TV sector while maintaining investment in the Production Growth Fund.