Hosted by ACRE (Australian Centre for Rural Entrepreneurship) in association with SEWF 2022, the Rural Gathering (2-5 October) was held in Northeast Victoria – a rural region that is a hot bed for social enterprise in Australia. Community Enterprise in Scotland (CEIS), in partnership with SEWF via the International Social Enterprise Observatory (ISEO) were able to support delegates from the Scottish third sector to attend SEWF22 in-person. Included in those receiving support is Aimee, our Rural Social Enterprise Coordinator. 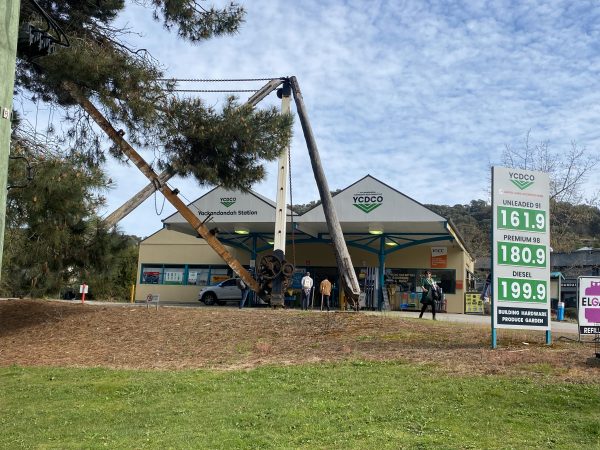 The petrol station run by the YCDC.

Day 2 of the Rural Gathering began with an early start where attendees were encouraged to make their way to Old Beechworth Gaol for 7am to get some breakfast before the immersive field trip began. Once fed, attendees were driven by bus to Yackandandah, a small tourist town with a vintage look.

The group were greeted by Mark McKenzie McCarg, the foundation shareholder of Yackandandah Community Development Company (YCDC). Mark told the group a story about the formation of the YCDC which had been established in response to the closure of the town’s local petrol station.

In 2002, a hand-written notice appeared in the window the town’s only petrol announcing that it was set to close within the next 2 weeks. Unable to find a buyer, the owner had no choice but to shut the petrol station, leaving locals concerned about where they would buy their petrol. It was at this point that seven locals came together to form the YCDC, investing $1000 of their own money. They bought over the petrol station to ensure that it had a future. As a result of this decision, Yackandandah is now a thriving tourist destination. 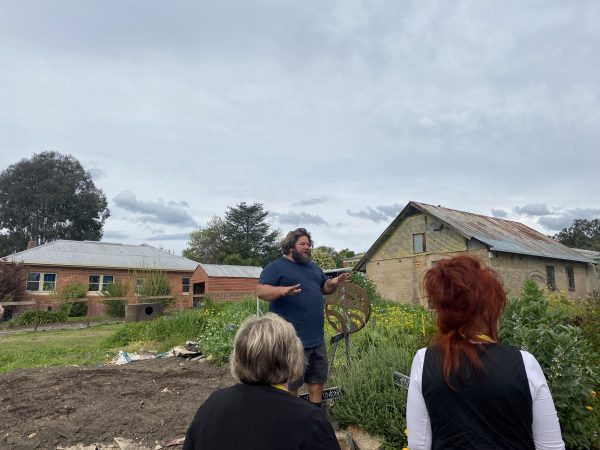 Josh Collings giving a tour of the Community Market Garden.

The group were then given a quick look around before getting back on the bus and making their way to Corryong.

Once in Corryong, the group were taken to the Upper Murray Events Centre and provided with a lovely lunch consisting of sandwiches, meat pies and cakes. After lunch, Sara Jenkins and Gemma Whithead from the Corryong Neighbourhood Centre (CNC) told the group about how their organisation leased the town’s bakery and turned it into a social enterprise in a bid to help build employment and training opportunities in the town back in 2015. The bakery’s success allowed NC to turn its attention to the neighbouring town of Walwa, home to just 300 people, to establish the Upper Murray Rural Service social enterprise. With the help of funds from the William Buckland Foundation and Social Enterprise Australia, the business is operating, and locals do not have to travel out of the region to access mechanical repair services. 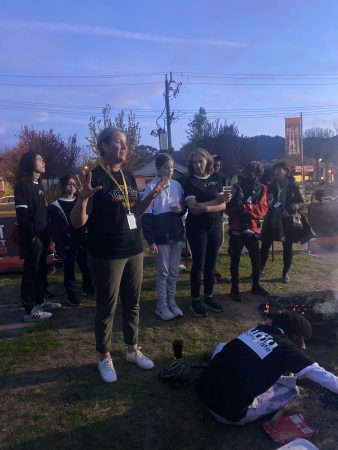 The group were then spoken to by Josh Collings, co-founder of the Acres and Acres Cooperative who saw a need in the Upper Murray to provide fresh produce to the region’s small communities following devastating bushfires of 2020. Acres and Acres Cooperative started from a small food swap group in the region with the aim to set up a series of community market gardens across the Upper Murray. The group were then given a walking tour of the organisation’s thriving market garden before returning to the bus.

The group then travelled to Bright where they would be staying that evening. They were treated to a delicious meal at Bright Brewery consisting of Kangaroo steak and were given samples of ‘crocodile popcorn’. Some of the lands traditional owners gave an overview of the area and discussed the work done at Dumu Balcony Cafe, an eatery with a strong focus on sharing Aboriginal culture, values and food. After dinner, attendees made their way back to their accommodation, ready for more learning in the morning. 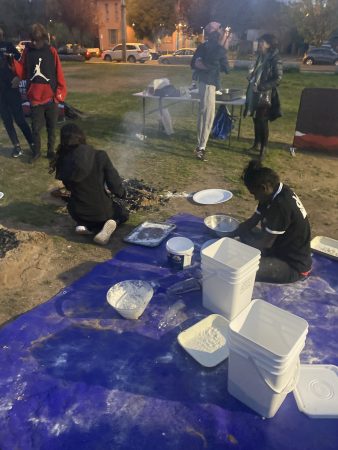